Grant Shapps is campaigning to get the Super Hospital promised by Gordon Brown, built in Hatfield.

Please support his Campaign www.MakeHealthcareLocal.org by signing the petition.

We all know he will work hard for this. Let’s give him the ammunition.

Here is some background information for you.

This is because we just don’t claim it back

I know we have an ageing population and an increasing population through immigration, but the NHS is simply not being run efficiently.

You have probably seen the TV advertisements re Strokes based on FAST.

Our Local Health Authority has interpreted FAST as, call an ambulance, wait 20 mins, sit in a traffic jam for half an hour on the way to the Lister in Stevenage, then queue there because it is completely overloaded. The good news is that it will solve the waiting list problem because by that time you will almost certainly have died.

Such is the state of our public services today. These are decisions based on politics, not customer needs. That is not good enough.

We currently spend 10 times the amount of money on the Health Service than we spent in 1975. Today I have to wait 6 weeks for an appointment with a doctor. Back in 1975 when a patient called my father (a local GP) at 3.00am in the morning, he would get out of bed and visit them at home.

They are ill after all – and that is the job.

Medicine used to be a vocation, a calling to look after the sick.  It has become a job and about money.

We need to stop the rampant fraud in the NHS, train up more home grown nurses and qualified health professionals. Pay the nurses more. Doctors, consultants and GP’s have NHS salaries between 75 and 105 k per annum. Health Directors earn up to 110k per annum and can double that with private patient care. Nurses conversely work longer hours, deal with all the unpleasant bits and get paid from £15,500 per annum or 1/7th of the doctors. Is that right? The BMA area doctors union. We need to treat both Health and social care under one roof and ensure that salaries are decided independently, not by self-interest groups. That means training enough homegrown nurses and doctors so we cannot be held to ransom. 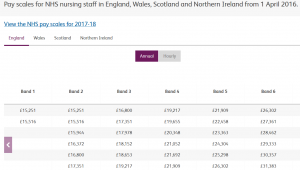