The night before last The Bank of Japan cut interests rates to -0.1%

What does this mean and Why does it matter to us in the UK?

Lets start with a couple of charts 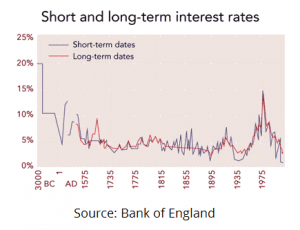 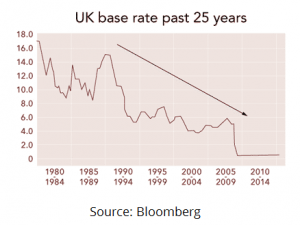 For the last 500 years long term interest rates have been around 5%. That means you work hard, save money and get a 5% return on your investment, so £100,000 pays £5000 a year in retirement. Please note that this time period includes the financing of two world wars.

In the last 30 years this stability has gone badly wrong. What has happenned? Basically irresponsible lending by banks, and borrowing by Governments has led to a debt mountain that we cannot repay. 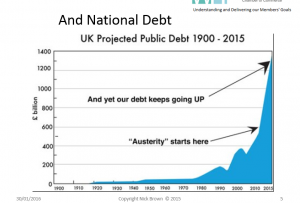 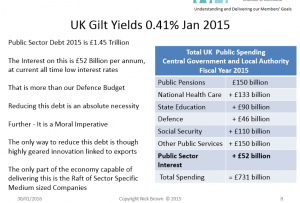 That is to say that at 5% interest, the long term average, Britain is horribly bust.

This is why we have a desperate situation and why interests rates are being kept low.

So what do negative Interest Rates mean?

Well instead of our being encouraged to save money for a rainy day, it will cost you money to save money, so it will in an inflationary world be sensible to spend whatever you have right now.

This puts you into a very dangerous position of no safety net.

So given the choice between having a population on the verge bankruptcy and cutting back on bureaucracy and public sector waste, Governments across the world have chosen profligacy and continued expensive lunches for themselves and their public sector chronies, over doing the right thing.

Basically they want to get you to spend your money so they can tax that expenditure.

The problem is that this will not solve the problem.