Let me say at the outset that we have no reason to believe that there is an issue with the main UK high street banks, who have been through stress testing and have made capital provisions. (Some more than others.)

This is all about banks having the capital base to fund lending. The business of banking is about being able to borrow low and lend at a higher rate taking a turn on the transaction. In theory the higher the risk the higher the return. However the banks still need to repay their own borrowing, so in theory, it would only take one default for the bank to be in a negative cash flow scenario. For this reason, they are expected to have sufficient capital in their balance sheets to more than cover the risk.

Which brings us to the point. The ratio of capital provision to the type of risk is key.

Metro Bank has just lost nearly 40% of their share price. 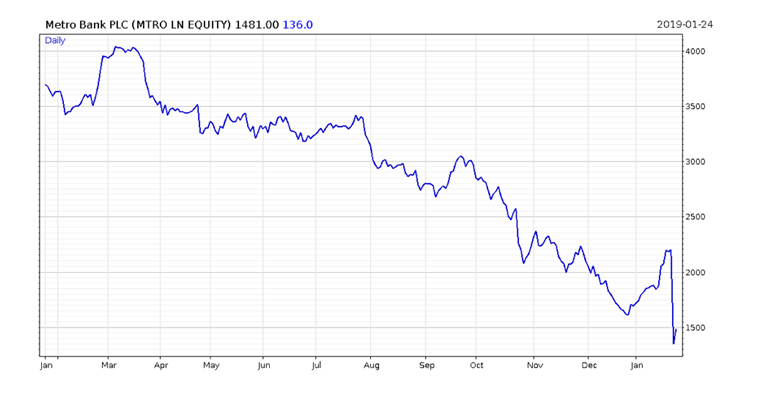 Does this matter? Well yes, it does, because it seems that most European banks are in a similar or worse situation.

“A similar, seemingly benign “accounting error” has been made in the European banking system – but the consequences have yet to come. And in the case of Europe, it’s not one commercial bank that’s made the error. It’s damn near all of them.

Similarly risky loans have been made, not in the billions, but in the trillions of pounds. They too have been placed on the accounts in the “wrong risk band”. And while Metro put too little money aside to account for the risks, European banks haven’t had to put aside any.

This accounting error comes from the very top – it was made by the European authorities, not the banks. This is what has enabled the vast accumulation of risk assets, with little put aside as insurance. “

You need to know this. My personal opinion is that Europe is heading for the buffers. Whatever your opinion on Brexit, be aware of this significant risk.