OK I have now debated this three times, and discussed it on the doorsteps, and where I am at, is that the remain campainers, generally have a very good reason based around short term self interest, and are protecting those interests through a scare campaign. The Leave people are genuinely concerned about what the future will look like for our children and theirs if we give our decisionmaking power away to unelected unaccountable and uninformed bureaucrats who are not acting in our best interests.

This is why all the credible ex Chancellors of the Exchequer (except John Major) and Governors of the Bank of England are voting for Brexit. They have not got a cushy job waiting for them in Europe. Think Neil Kinnock.

I should yet again point out that these are my own opinions and do not necessarily represent the views of the Chamber or its members. However given that Downing Street and the BBC seem to be using their full resources to support Remain, which is hardly democratic and smacks of Orwell’s 1984 (Ministry of Truth) I feel justified in speaking up for the organisations that generate the cash that pays their salaries.

Also you will no doubt have been told that business is overwhelmingly in favour of Remain. NOT TRUE! Well those with loud voices and vested interests are, Shame on Richard Branson, he should know better.   The director general of the British Chambers of Commerce, John Longworth spoke out for Brexit, and the vested interests fired him. So Much for Free Speech!! We need to take back control of our freedoms closer to home, let alone Europe.

Anyway here is a poll taken by XLN, (Phone and Broadband Suppliers to SME’s) across their social contacts, which showed a clear preference for Brexit. 5500 busineses responded. Interestingly there was a real spread across the media channels.

We think that facebook in a Business environment is predominantly Young Entrepreneurs, which is very reassuring as it clearly demonstrates the confidence of youth to get out there and trade with the rest of the world. Good for them. Lets ensure that our monopoly players don’t obstruct their progress. Linked in predominently a bit older. 60% probably representative of that market. Twitter, more gossip based, freely available and less populated buy entrepreneurs in % terms. Well done XLN. 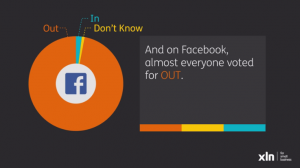 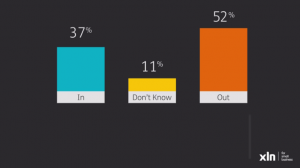 Dominic Frisby is a senior writer for MoneyWeek the City daily newsletter. It is highly credible and influential and regularly interviews the top brains in the country from Mervyn King to Roger Bootle, both Brexiteers, incidently.
Here are Dominic’s ten reasons to vote Leave…

I love Europe, but I want to leave the EU

It’s obvious. But based on some of the things I’m reading on social media and elsewhere, it needs saying again.

Voting to leave the European Union (EU) is not voting for Boris or Nigel or anyone else. The elected Conservative government will remain in power until there is another election, at which point we can vote for a different party if we so wish. This is simply a vote on whether we should remain part of the administrative body that is the EU.

I should say, my grandparents were Italian. I speak five European languages, three fluently. I have lived several years of my life on the continent, and I do business with people in Europe all the time. I’m a europhile.

And I want out of the EU, and here are ten reasons why.

1. Centralised power is the wrong way to go

People thrive most in societies in which power is distributed as thinly and widely as possible. In such environments they are happier, healthier, wealthier, freer, and they achieve more.

The EU, by design, centralises power in Brussels. We are moving into an age of decentralisation and localisation. The EU is the wrong model for the times.

Since the inception of the EU in 1993, the economies of Norway, Switzerland and Iceland (even with its financial crisis) – the fringe nations – have on a per capita basis dramatically outperformed their neighbouring EU economies.

We would be a fringe nation and that would suit us.

3. Regulation should be local

Around 65% of regulation is now set in Brussels. It is of a one-size-fits-all variety, and so often inappropriate to local circumstances. Rather than facilitate progress, regulation hinders it.

Yet, once in place, regulation is hard to change. Rather than get cut, it is added to. We already have too much in our lives. What we need would be much better set locally, according to local needs and circumstances.

4. The economic disaster that is southern Europe

We now have 39% youth unemployment in Italy, 45% in Spain and 49% in Greece. These countries are unable to do the things they need to do to kickstart their economies because decisions are being taken on their behalf; not locally, but in Brussels.

I cannot support with my vote an organisation that has inflicted such misery on its people. Reform of a bureaucratic organisation like that from within is an impossible undertaking.

There are more and more people in the world and – whether it’s those displaced by wars, by lack of water, by poverty, hunger or lack of opportunity – more and more of them are on the move. We are in a migration of people of historic proportions.

The UK, in the way it currently operates, will struggle with immigration levels over 300,000 a year (and growing every year) for a sustained period. We don’t have the infrastructure (see James Ferguson’s in-depth piece on immigration on the MoneyWeek website for more detail on this).

I wonder how we get those numbers down. I’m not sure we can, either in or out of the EU. It is a tide in the affairs of men. But we are in a better position to do it with total control of our own borders and border policy.

6. Trade deals are a red herring

Here’s a chart of exports for your delectation.
There is no point having a common market if the economies of the countries you’re in that market with are dying.

The obvious explanation for this is the rise of the Asian economies, which have taken on a bigger share of global GDP. But why then has the US’s share not fallen by as much?

The EU is not a democratically accountable body. I didn’t vote for the administrators and nor did you. I don’t know who most of them are. If we want to vote them out, what do we do? We can’t do anything.

And if you want some idea as to the esteem in which they hold democratic process, how about this from the president of the European Commission, Jean-Claude Junker: “prime ministers must stop listening so much to their voters and instead act as ‘full time Europeans’.” Or how about another one of his remarks: “when it gets serious, you have to lie”.

Just what you want in a president. Do you remember voting for him? I certainly don’t.

There is no greater manifestation of the wealth divide in the UK than who owns land and who doesn’t: 70% of land in the UK is owned by fewer than 6,000 people. Yet these people are not paying tax on the land they own, they are receiving subsidies for it. Landowners are being paid by the EU to own land.

Of the EU budget, 40% goes on agricultural policy. This has created vast amounts of waste. It has propped up inefficient businesses that have failed to modernise. It has re-enforced monopolies which should be broken up. Worst of all, it has meant that African farmers have been unable to compete, depriving millions of a livelihood (not to mention cheaper food for the rest of us).

I cannot endorse with my vote an organisation that does this and shows zero inclination to change its ways.

60% of EU water is British or Irish. We have not been given any continental land (why should we be?), yet we have had to cede control of our waters to gain EU membership. What was once a huge industry and the largest fishing fleet in Europe has all but disappeared.

The French, Italians, Spanish and Greeks had fished out the Mediterranean. They were given access to our waters and our quota was reduced to 13% of the common resource.

The quotas system brought about the dreadful practice of discards (putting dead fish back in the sea), and reformed EU regulation now means that rather than being put back in the water, it is brought back for landfill instead.

Let’s have our waters back.

I don’t think it takes a genius to work out which way I’m voting tomorrow. Good luck with whatever you choose to do in what will be a historic occasion. I’m looking forward to it.

I believe, in the event we vote to leave, we will experience an economic boom that will take everybody’s breath away, to the extent that we will look back and wonder why we were even discussing it. Fingers crossed.

If you think this article might persuade any of the many wavering, undecided voters, please share it with them.

From next week, I’ll be back with the usual investment thoughts and ideas.