The Case for Europe – In or Out on 23rd June

As 23rd June rapidly approaches, I am concerned that so many people are rightfully undecided because they do not fully understand the issues. This is further complicated by the Government who, far from explaining the issues, are providing contradictory claims that further muddy the waters.

This article looks to examine some of the underlying factors, which can be understood by voters, and which I hope will appeal to common sense. I should stress that these are my personal opinions, and do not necessarily represent the views of all the Chamber members.

This vote is important because it will determine the quality of life of our children and their’s for generations. The fact is that we are in a very difficult position, and that difficulty is our National Debt which has spiraled out of control in the past 20 years.

I am going to make the case for getting out of Europe, based on the belief that it is the only way we can get this debt position back under control. So let’s try to understand the size of the problem. (Click on the images for a clearer view) 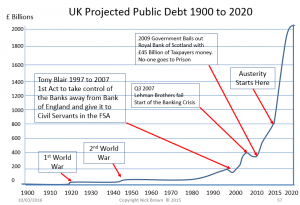 Since 1990 our National Debt has rocketed out of control. What does this mean? 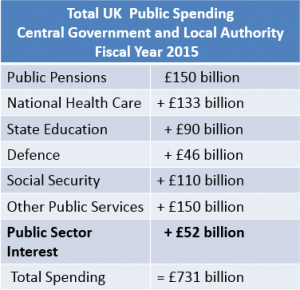 It means that 7.5% of our current Public sector budget just disappears in interest. Last year that was £52 Billion – more than our defence budget. But remember that this is with interest rates at all-time lows. 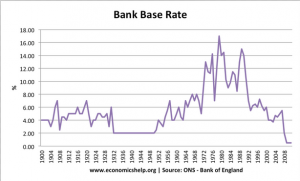 If, instead of interest rates being ½ %, they were 2 % then that would move our interest rate payments from 7.5% to a full 30% of our Public Spending budget. That is over double our education budget. These types of numbers are simply not sustainable. (These figures are illustrative, 2 year Gilts, the rate the government borrows at, were around 0.41% in 2015) I certainly don’t want to scaremonger but in some ways these figures are out of our hands, if Moody’s reduced our credit rating again, as they did in 2015, this would push those gilt yields, (interest rates) upwards. Remember what happened to Greece, as the market lost confidence their interest rates rocketed. We will return to Greece later.

As we all know there are only two ways to reduce debt, spend less or earn more. When it comes to National debt that means reducing public spending or increasing exports. Let’s look at these two opportunities separately.

In the UK we believe that the State is there to serve the needs of the People. This is the basis of our democracy. It is enshrined in the Magna Carta and has been implemented by our legal system of Judge and Jury for 100’s of years. The reason we have, over this period of time, fought the French and the Germans is that, at a fundamental level, they do not believe in those freedoms of the individual. The French and the Germans believe that the People are there to serve the needs of the State.

Since we have been in Europe the burden of our public sector spending has exploded. 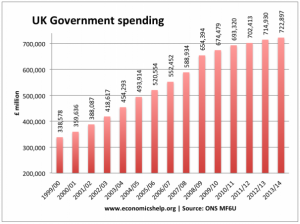 In fact, since 2000 it has more than doubled. The cumulative effect of this since 2000, if you take a linear view an increase of over £25 billion a year for 15 years which works out at £3,000 billion or £3 trillion. Some of this has been absorbed by the increase in GDP, but this explains the source of what will be a £2 trillion Debt by 2020. Put another way, had we kept public spending at 2000 levels we would have no debt, rather a surplus of over £1 trillion to spend.

Does this represent good value? 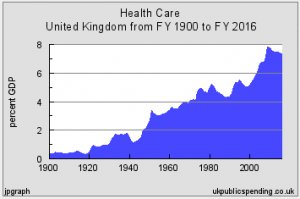 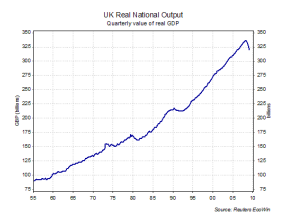 But so has GDP increased over 3 times since 1960 to the actual health spend has increased 10 times.

Are waiting lists 1/10th of the 1960 values? No they are worse. In 1960 the GP came to your home when you were ill. Normally the same day you phoned him. The point being that whilst I am a massive fan of the NHS, we need to cut bureaucracy and get on with recruiting doctors who see their profession as a calling rather than a career.

So having looked at domestic spending, what does membership of the EU cost? 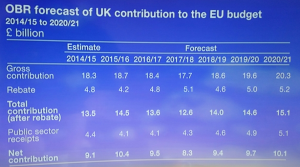 The answer is £14 to £18 billion a year. As I understand it the rebate can be removed at the drop of a hat, and it certainly is not the £9 billion figure because the Public sector receipts come with some many strings attached as to be worthless when it comes helping business. In Welwyn and Hatfield Chamber of Commerce, we have looked in detail at obtaining ESIF and ERDF funding from Europe for our members, and it is a mechanism for even more bureaucracy and control of activities by bureaucrats.

So we spend some £700 billion a year, getting out of Europe might save is £15 billion. Some 2% of the total. So leaving Europe will not in £’s terms provide the solution.

So as discussed the choice is, cut more, export more, or do some of both. We have to find ways to be more efficient in the Public sector. Michael Bloomberg of the Bloomberg news agency and recently Mayor of New York was talking last week about the stand-off between Democrats and Republicans resulting in the demise of America, and the consequential popularity of Donald Trump in the American primaries. The “At Least he will do something” concept.

And this is the point, Bureaucrats are inherently risk averse. As generalists they lack the specialist knowledge to make a judgement call based upon quantified risk. There are many good people working in the public sector, but every time they try to solve a problem, it upsets someone, as change always does, and they get stamped upon. Even if they were brave enough to go it alone, they do not have the skills and would get no support.

So my point is that what we can avoid disaster, through more individual endeavor that joins up skills and resources to deliver innovative products we can export and most importantly fewer bureaucrats. Europe means more bureaucrats, more crushing red tape, more tax to pay for this empire building, and less resource or even the will to innovate so we can export. 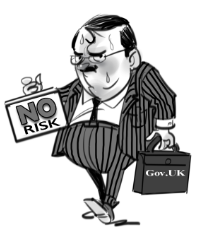 Just as a final thought on the cutting costs argument, look what Germany and France did to Greece. They could have said, Let’s cut your debt burden so you can trade out of this. (It’s what we did for Germany after WW11). Instead they said Let’s increase your debt burden so we can continue to control you. Athens is on fire every evening. We don’t want that in London. Make no mistake the French and Germans would love to have that control over us and our freedom of spirit.

George Osborne wants to increase Exports from £600 Billion to a £Trillion (£1000 Billion) by 2020. This is the number that given continued low interest rates is the amount of exports required to meet the interest payments if public spending remains the same (It is still going up). The way to maximize exports is to “Scale up” Existing innovative British Firms.

We still have some of the best education establishments in the world, so why are we so often unable to take new ideas and convert them into commercial success?

Well I am sorry to say it is those bureaucrats again. Some 90% of UK businesses are very small, typically lifestyle businesses or startups. Some 90% of start-ups fail within 2 years. There are around 9% of businesses that are established employ over say 30 people and innovate to survive. This leaves the 1% that are very large, based usually upon some kind of monopoly. 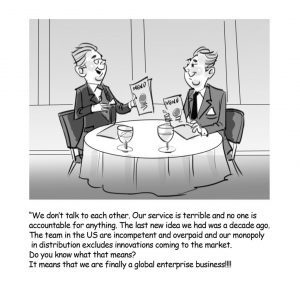 Last year I asked the team at the Cabinet Office, “What is the biggest problem facing the UK Economy today” they were quite clear as to the problem “8/10 of our £50 million plus turnover businesses fail within 10 years”

This happens because, in the ever faster changing world in which we live, they simply get left behind. This is where we should be spending our time and effort, supporting these medium sized organisations that are already successful and helping them reinvent themselves and export existing products.

And yet our bureaucrats spend their time supporting start-ups and courting the very large forms whose monopolies so often stifle innovative ideas coming through.

So on the run up to our referendum on the 23rd June, I would ask you to read Roger Bootle’s book The Trouble with Europe. It gives a balanced view from a man who won the Woolfson Economics Prize, and runs Capital Economics, a City of London based research firm. I would also ask you to recognize the underlying motives of the different groups. The Bureaucrats want to stay so they can build Ever Bigger Empires in an Ever Closer Europe, (They are the same thing), at your expense, at the expense of your Children, and at the expense of innovation. Close to these bureaucrats are the managers of the very large firms who want to maintain their monopoly, by stopping innovation. They will want to stay in Europe. The Bankers, who want to control the world by putting us further into debt, then claim they should be highly paid for solving the problem they, along with the bureaucrats, created in the first place.

On the other side of the argument are those who want to leave Europe. These are the people who believe in individual freedoms and freedom of speech (Have you noticed how bureaucracy crushes that free spirit). Who believe that by hard work and using our wits, we can build relationships with people all round the world. We can trade with them, use our English language and our skills to transfer our knowledge to emerging economies. We can rebuild the trading nation that made Britain Great. We can support our large firms by using their existing contacts and distribution channels to export our products and ideas. We can joint venture with overseas organisations to bring investment into those Countries, that are currently divided along race and tribal lines, and replace corrupt bureaucrats and the divisions they create with a meritocracy.

When you vote on 23rd June your choice will actually be between those people who stand a fighting chance of solving our problems, and those who would crush that free spirit and tie it down with ever more red tape. Know also that our Children and their Children will judge us for the rest of their lives. We have already left them with a mountain of debt that will crush their dreams. Let’s call an end to this nonsense right now. Vote to get out of Europe and take back control of our Destiny. The alternative looks like Greece.

Roger Bootle concludes that in the short term there will be adjustments, but far fewer and quicker than the scaremongers predict. However, in the medium to long term we would thank our lucky stars we had escaped the confines of Europe and taken a lead in the opportunities presented by the growing world upon which we live. After all it is the only one we have.