I came across this graph and commentary in Source Southbank Investment Daily.

It illustrates one of the mechanisms whereby Germany controls other countries through debt. Historically when the German economy has done well, the Dmark has increased in value making German goods and services less competitive.

The Euro stops this balancing mechanism and is one of the reasons why there is inherent instability in the system. When the debts get too high, people and countries default.

I don’t want to scaremonger or be melodramatic, we have had a habit of weathering these storms and it creates lots of jobs for bureaucrats to sort out the problems they have created.

However, I do think it is important that we all understand the mechanisms that are driving these events. 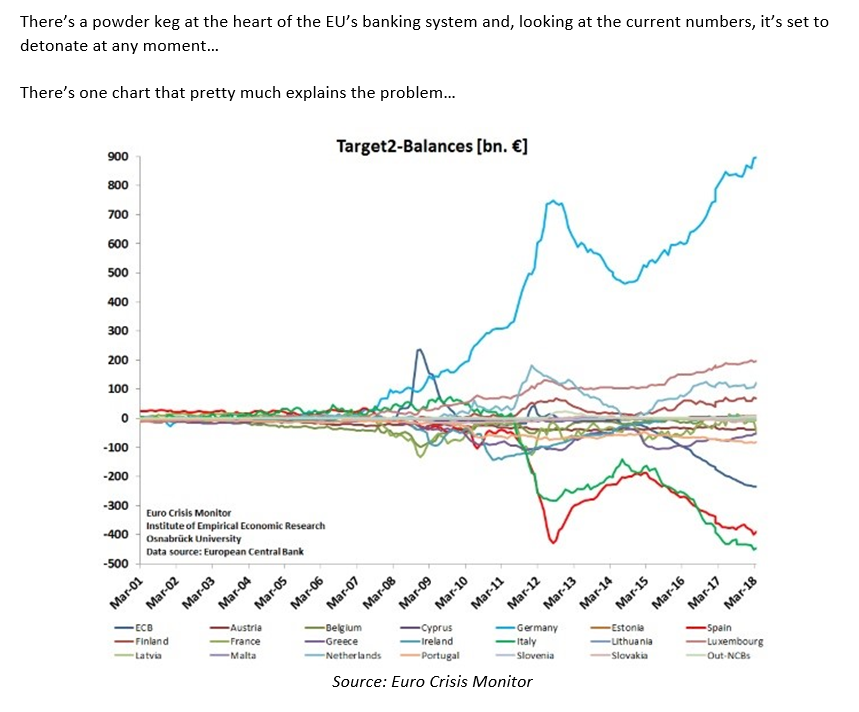 This shows the balance of payments inside the Eurozone system, called Target2.

Target2 is mediated by the German, Italian and Spanish central banks, as a single ‘ledger’ that shows the outflows and influxes of Euros to and from each country.

If an Italian consumer purchases a German-manufactured product, Euros flow out of Italy into Germany.

However, rather than allowing a surplus of Euros to build up in German banks, and thereby causing a scarcity of money in Italy, Target2 creates a ‘claim’ on the German side, and a corresponding liability on the Italian side, and sends the actual cash/credit back to Italy to maintain liquidity.

This system has, in effect, extended countries with trade deficits an interest-free, unlimited ‘credit card’ with no payment terms or deadlines in which they must settle their liabilities.

ECB officials first tried to hide and obscure this data behind opaque central bank balance sheet figures. Once researchers laid it bare, they then attempted to obfuscate and claim it’s all just accounting details that will eventually come out in the wash.

Certainly, a brief return to sanity calmed their fears around 2013-2015. But as you can see from the chart, since then the green line denoting Italy’s liabilities has crashed to over -€450 billion as of this month, whilst the Bundesbank (light blue line) is now on the hook for almost €1 trillion of other countries’ liabilities.

What happens if Italy decides to leave the Euro? Those €450 billion worth of claims that the ECB is owed become worthless overnight.

This will essentially bankrupt the ECB, who will then require the rest of the Eurozone countries (especially Germany) to recapitalise it.

And maybe German taxpayers won’t want to subsidise this economic experiment any longer, at which point the entire EU house of cards collapses…

Also, here is a perspective from Bloomberg