You have probably seen this, and I don’t want to be another Corona commentator. However I am feeling the need to record this. It is quite clear that our Government is not only completely unprepared, but is also getting the numbers badly wrong. We can only hope that these numbers are incorrect. But they make sense to me.

How can the Government plan for the future when is numbers are out by 100% and the Ministers don’t even seem to know what they are. See Piers Morgan interview with Helen Whately Care Minister. 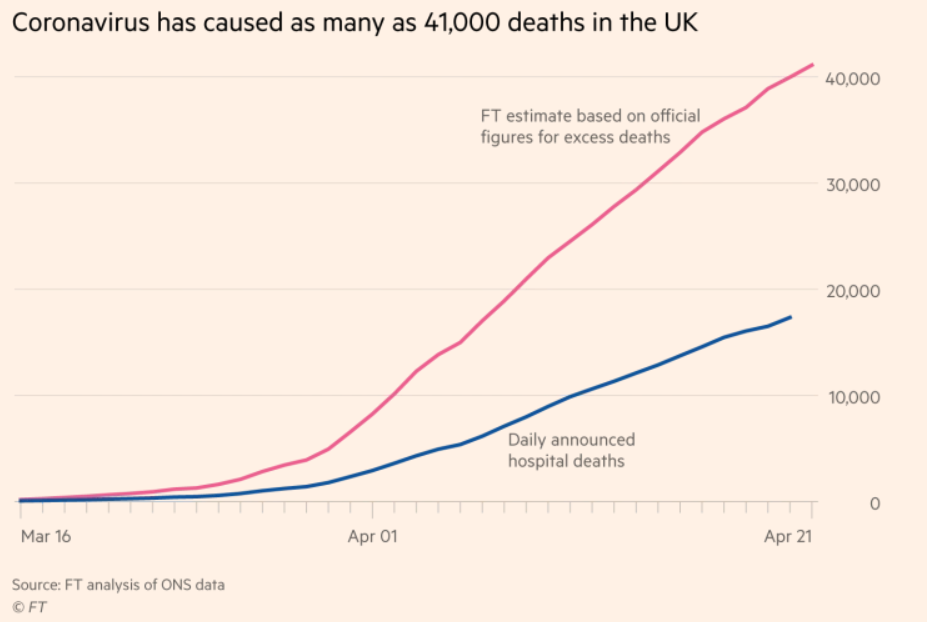 The FT Estimate 41,000 deaths. They have arrived at this number by taking the recorded deaths up to 10th April, which include all deaths recorded, and compared those to the running average over the past 10 years. That have then extrapolated the line forward to 21st April. This is an estimate, on the 10th April the numbers were double the government estimate.

See below for the analysis of where these deaths occurred 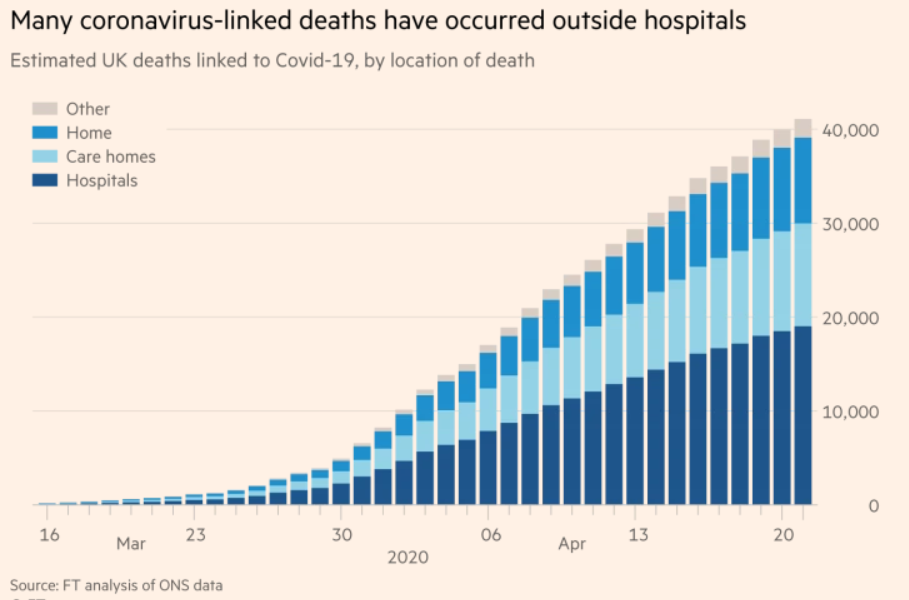 If these numbers are accurate, and it may well be that the www.worldometers.info data does not include home and carehome deaths, but if they do, this puts us second in terms of total count behind the USA with 47,676 deaths in total on 22nd April. However in terms of deaths per million population, it puts us way out in front with some 550 deaths per million, against 144 per million in the USA, and next highest 464 per million from Spain.

Why did we not do the testing, and have the PPE? because we were unprepared, and our civil service leaves a great deal to be desired.

Why did we not STOP the PLANES? Because we took the wrong decision, and 40,000 people have died as a consequence of that decision. Not to mention the economic consequences.

In Germany there have been some 5000 deaths equivalent to 63 deaths per million population. That is nearly 9 times better than us.

We need some accountability here. Named individuals and government departments, clearly identified and asked to explain themselves publically. This is not a witch hunt. It is aimed at delivering a wake up call to the people we pay and elect to protect us, that there are consequences for those individuals, in the hope that they will be prepared next time.

In 1918, the virus came back, and killed 50 million young healthy people. There are currently some 40 differrent strains circulating the earth on airoplanes looking for the most vulnerable populations to multiply in, and produce more mutations. Let’s hope that does not Happen.

We still need to stop the planes, because Herd Immunity (Discredited as it is) Will work eventually so long as there are no more new strains being introduced into our community.

Stay safe. Wipe down all deliveries with anti bac, then wash you hands afterwards.

Wear Masks. It is emerging that the Government advice on that was wrong also.

A sneeze full of virus can travel tens of yards and stay in the air for minutes. We studied this at A level Biology in 1977.

Why don’t our decision makers know this???

Very Worrying.  Time for a re think on who takes our decisions and how they are managed.