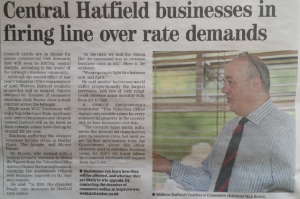 The VOA base their rateable values for 2017 on rents agreed in 2015. When the Council used its position as a trusted landlord to increase rents by 200% in Town Centre Hatfield, it did so knowing or not caring that this would increase business rates in 2017.

They certainly knew, because I told them.

It is the smaller units that are most effected, so I have looked at VOA data on 30 units in Market Place Hatfield and taken an average.

If your RV is between £6,000 and £12,000 your sbrr reduces in a linear manner down to nil. Those busineses whose RV is greater than £12,000 will pay full rates, based upon the poundage set by the local council normally around 40% of RV.

At a time when Conservative Central Office is talking about fairness and a redistribution of wealth to smaller businesses, this provides a very clear indication of what is going on in Welwyn and Hatfield. I asked John Dean why he was doing this and his response was that ” It is not the job of the council to look after the interests of business” Well that at least, is unambiguous. However nor is it Conservative Party Policy. And yet John Dean stands on a Conservative party ticket.

The Councils own policies are worth noting here.

It is hard to see how they are living up to their promises. It would seem there is something different going on!!

Here is the promise- What is your reality?

Integrity
We will be honest, clear and consistent about what we do.

Fairness
We will be fair in our policies and decision making, listening to the views and feedback we receive.

Transparency
We will be approachable, accountable and transparent in the way we communicate and conduct our business.

Respect
We will have respect for residents, businesses, partners and employees.

More revelations to follow shortly about the Ludwick Family Club, and Why the Council are putting their rent up from £1,000 to £20,000 per annum. 3,000 residents have signed a petition, and guess what? They have been completely ignored. Watch this space!!