This was a great evening of real debate. Our thanks to Quintin McKellar – Vice Chancellor 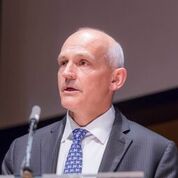 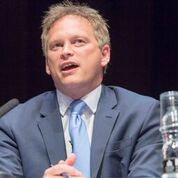 this panel of informed and experienced individuals. 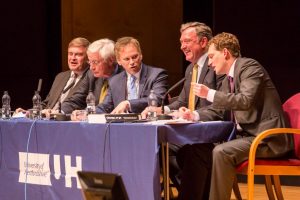 John May – Business for Britain – LEAVE

I should stress that these are my personal views, and do not necessarilly represent the views of the Chamber or it’s members.

THE VOTE – in this picture we have 42 Remain out of a total of 160. There were a lot of Leaves out of the picture on the RHS. I was one of them. 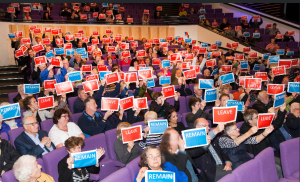 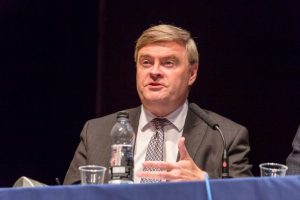 David Campbell Bannerman MEP. Very credible Member of the European Parliament, who knows what goes on there.

In summary he said “I am pro European but anti European Union”. The French and the Germans don’t just want ever closer union, they need it; to stop the EU project falling apart. That means a single currency and BGreat Britain becoming a region of Europe. In response to a question about how long this might take, he said following a Remain Vote about “5 years!!!”. I have no idea if this is true, but if this is what is going on, we need to get out now.

This is a man who is voting for his own redundancy without a redundancy package. Respect.

David clearly felt that the EU project is not working, and has no chance of working.

As I have said before, this is because the French and the Germans believe that

“The people exist to serve an unaccountable state”. An ever closer Bureaucracy.

That is what this vote is about. 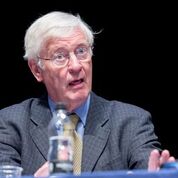 The Liberal Peer, clearly believes that the defence arguement holds sway. Churchill’s argument for a closer Europe. He clearly felt that we should all be friends and trust each other. He dismissed the thought of a European Army.

The fact that NATO has kept the peace since 1945, and the EU have managed to destabalise Ukraine resulting in the rise of Putin and the consequential bombing of Hospitals in Syria, seemed to escape him. That, and the fact that there were European Tanks on manouveres on Salisbury Plain only last week, under the control of guess who, An Austrian General, seemed to escape him.

I was at the Trouping of the Colour last year and the Household Cavalry made a Salute to the German Ambassador. To what purpose I ask? There was a very uncomfortable feeling in the crowd. You may not have seen it in Sainsbury’s yet, but it is being decided behind those unaccountable closed doors from which we are increasingly excluded.

PS if you are ever on a Panel, remove the bottle of water. It looks silly.(See Above) 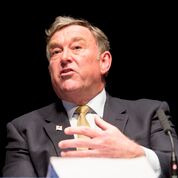 John May was very impressive. He spoke with humour and authority effectively debunking an overflow of alarmist, fear mongering statistics, knocking each out of the ground with the skill of Ian Botham and  Viv Richards playing at Taunton on a Saturday afternoon. 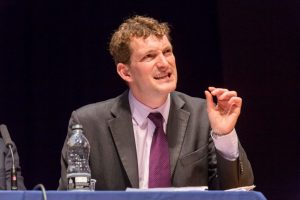 The Chap from the CBI. Made lots of statistical claims. (Note to self. Stats are not credible in this debate)

Nigel Lawson (Bless Him) has said that. 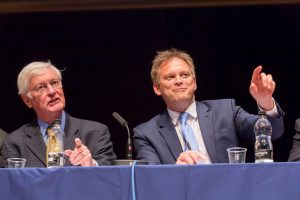 Grant handled this with real skill. Avoiding the single points with rant potential, keeping the debate flowing, and demonstrating a real understanding of the issues. He brought the right people from the panel in at the right moments whilst engaging with the audience. Good job.

On a final note to those of you who are still confused, misled or undecided. I would encourage you to ask anyone who is asking you to Remain – this question:-

” Why do you want to take, our and our childrens’, control of our decision and lawmaking making processes, away from us and give them to a bunch of unelected, unaccountable French and German Bureaucrats, who are not our friends and will not act in our interest any more than they did in the interests of the people of Greece?”

Greece is now up to its ears in Debt it can never repay, and has 59% Youth Unemployment.