Mindful of the Stockdale Paradox, I think we need to be realistic.

Will the economy bounce back? Or will it take time?

Is the Government in control of Bounceback or are there other factors at play?

How big is the hole from which we are bouncing?

The investment bank now expects the unemployment rate to peak at 25%—on par with levels seen during the Great Depression—rather than the 15% it was anticipating previously.

Goldman also revised down its forecasts for GDP: it’s now expecting GDP to plummet 39% in the current quarter, slightly more than the 34% drop it expected before.

For the year, Goldman is expecting GDP to drop 6.5%.

Much of the economic damage comes down to changing consumer behavior—spending at restaurants likely dropped by more than half in March and April, analysts say, and healthcare spending also fell as people cancelled elective procedures.

Manufacturing output also fell 26% in April as auto production came to a near standstill. Even industries unconnected to the virus, like professional services, took a hit thanks to stringent social distancing measures.

This is not a slowdown like running out of Petrol, it is more like a boat hitting a mud bank or putting the brakes on. Its a sudden stop. Also climbing out the other side will be slowed by low consumer demand, Capacity restrictions through distancing, and simple human preservation, we dont usually go in for actvities that could kill our family members.

The Government has no control over these. 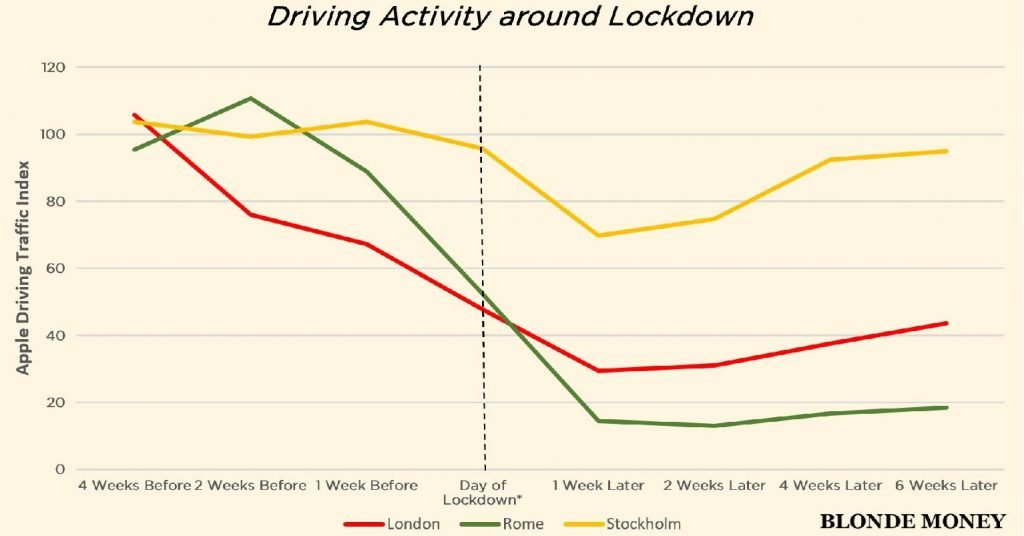 Driving activity in London had dropped by 60% even before the lockdown, and only a further 10% afterwards. The lockdown made no differrence to the trajectory of the curve.

What I am saying is that people will, quite rightly put their families safety first.

Maybe it is time to hit the reset button, and cut a load of costs out of the system.

£10.5 million a year paid to Movianto to store 55,000 pallets of lifesaving PPE equipment.

But nobody picked the phone up to place a test order, to check the system worked.

And nurses died as a result. We pay £150 Billion a year for our public sector. And noone called to make sure the service worked. WHY NOT? It’s an interesting question. It’s a disgrace.