So How is Brent Crude Oil price connected to the Rouble, The Chinese Stock Market, Japanese QE and London Property Prices?

Source of Pics and Comment Money Week Magazine. Reproduced for information purposes only. 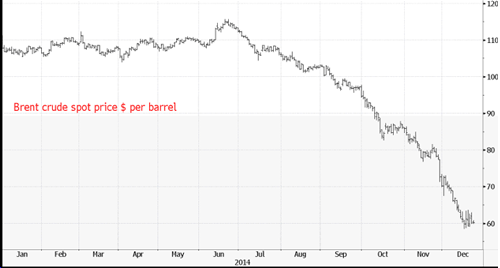 As we exit 2014, the Saudi oil minister told the FT this morning that “the world may never see $100 a barrel oil again”, and warned that even if oil falls to $20 a barrel, Opec will not cut production.

If there were any doubts before, it’s crystal clear now – we’ve got a good old-fashioned price war on our hands. The Saudis are determined to put their rivals across the world, particularly in the US shale fields, out of business.

This has affected the Rouble 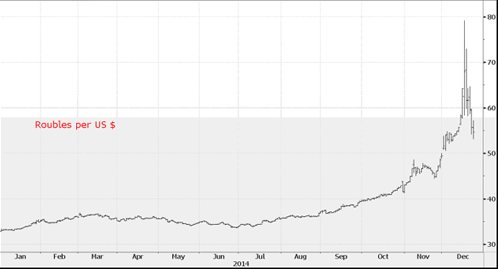 A direct consequence of the oil price war is that anyone leveraged to a permanently high oil price is now in lots of trouble. There are few economies in the world more dependent on oil than Russia, as the reaction of the rouble has shown this year.

The Japanese central bank’s balance sheet: it’s only getting bigger 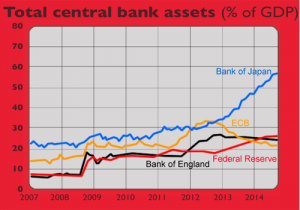 Why is this interesting?

In October the Bank of Japan promising to pump even more money into the Japanese economy.

Will it work? We happen to think that Japan will get better over the year ahead. The choice is pretty clear – Japan will do what it takes to keep the market rising, and if that means more money printing, so be it.

The Chinese stock market: this one can run and run 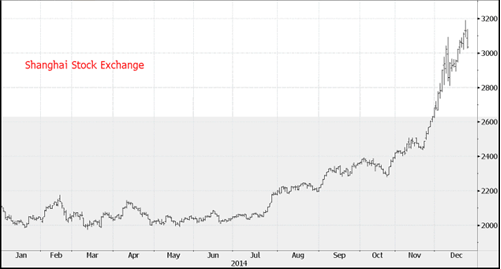 2014 is the year that everyone came to terms with China’s economy slowing. Even the most ardent China bulls couldn’t deny that the days of double-digit Chinese growth and endless consumption of resources were at an end.

However, proving the point that economic growth and stockmarket growth have got absolutely nothing to do with one another – or putting that perhaps more accurately, that there is no correlation between the two – China is the best-performing stock market of the year, up around 50%. 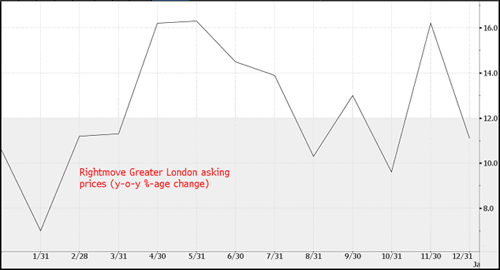 It seems that there’s a maximum that people are willing to pay, even for a foothold within the veritable paradise that is London. As the chart below showing the annual change in Rightmove asking prices in Greater London shows, price growth is showing signs of slowing.

New mortgage requirements have capped borrowing for many. A strengthening pound put an end to bargain prices for many foreign buyers. An increasingly hostile tax environment at the top end of the market has hit demand for trophy properties. Soaring prices have even boosted supply – at least at the top end.

So is 2015 the year that London property finally rolls over? We’ll soon find out – but if nothing else, it certainly looks as though you’ll get much better value elsewhere in the UK.